The exhibition features works by László Szlávics Sr. and Jr.

The guests are greeted by Dr. Károly Csúri, director of Collegium Hungaricum

The exhibition will be opened by writer Gábor Czakó 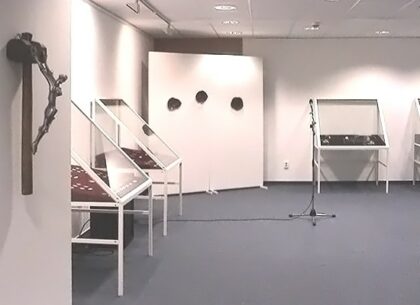 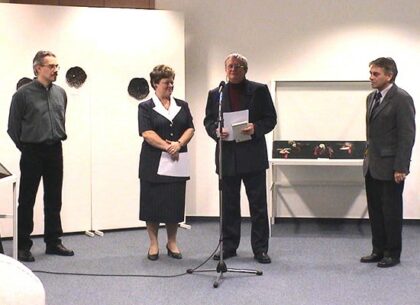 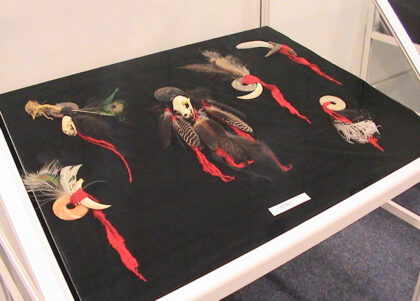 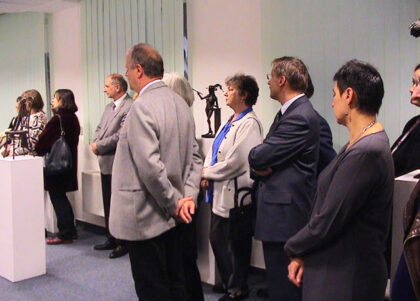 Welcome to the exhibition of the Szlávics masters.

It might be best to start with the simple one; it will get more complicated anyway.
The two artists, László Szlávics Jr. and Sr. are father and son.

300, 500 or even 5000 years ago nothing was more natural for the young ones to follow their parents’ trade; the painters’ sons used to become painters, in the Bach family generations of musicians followed each other. Nowadays if children follow in their parents’ footsteps, it may cause trouble, since this age, the Age of Market Economy is about competition. You are the rival of the others, so you have to beat them and if opportunity arises, wipe them out. Not all the people have the heart to do so; thus, the young ones are often worried whether they will be able to outperform their fathers or not.

Would the Market, today’s judging god recognise their efforts? Dostoievsky described the atmosphere of his age, saying that ‘it crosses everybody’s mind to kill his father’. And Freud later also elaborated the theory of father complex. Needless to say, nowadays parents often see rivals in their children as well. We don’t know whether the father complex had any victims in the artist families during the ancient religious ages before the Age of Market Economy. The flourishing and the masterpieces of the artist dynasties prove, there were much fewer victims than today.

What’s the reason? Perhaps for the simple reason that the aim and point of art was different. Today sculpture is merely one of the productional activities, which are under the control of the market, or rather of the profane forces manipulating the market. During the religious age, cult and culture used to form one unit, that is to say culture, including art had a cultic nature. It was something like a religious service. Art made an attempt to pronounce the unutterable name of God. Due to this spiritual saturation, kitsch didn’t exist in any of the periods of any of the religious ages; neither in the Middle Ages, nor in the prehistoric age, nor in the high and folk art. Clumsy works were made though, but no spiritually empty ones. Kitsch is an invention of the Age of the Market Economy along with penicillin, the telephone and the nuclear bomb. It means the work of art was made by the respect of the Market, that is, its spiritual content equals its god’s, the Market’s. That is zero.

Bulks of the works of art in the Age of Market Economy tend to become kitsch. Kitsch is something that doesn’t exist. Concerning its form, it looks like music, a sculpture, a film, but in spiritual sense it doesn’t exist. The creator of religious societies were looking for harmony, some common benefit instead of danger, that is why they didn’t sign their name on their works, though obviously there must have been some of them who longed for success, but even they knew there is no need to beat anybody else, not in the least their fathers. Making the decision about who got further in defining God’s unutterable name is not profane judges’ business, but God’s. His game rules are known from the Gospels or the saint books of tradition, according to which the meekest gets the furthest.

What joins the Szávics masters, first of all, is the normality of family traditions. Secondly, humility. The greatest respect, knowledge and application of the ancient rules of the trade. This is the basis of cultic art and other activities, pursuing the art, raising the material to the level of the spirit. At several exhibitions we can see exhibits made by metal sculptors that a beginner locksmith would be ashamed of.

Another important thing they share is glee. Béla Hamvas, the great Hungarian philosopher of the last century wrote the following about glee. “Glee is the only thing I’m not willing to give up for even the sake of lie. “Glee is the hot azure purity of the human soul freed by Christ’s smile; I am as real as I am gleeful; happiness and pain is the same; glee is one of the great wonders of the world; it comes from melancholy, which is the most delightful paradox; it’s not a laugh because it’s not overcoming, avoiding or cramp, free of history, has no other meaning but itself.”

It would be really worth taking the works one by one but I wouldn’t like to ruin your joy of discovery. Yet, let’s have a look at Leonardo da Pincsi, this fascinating flying man with its screws, or the lying figure of Life-path, which is a huge, rustic foot with the ornamentation of the proud Corinthian column head.

You can see here the famous scandalous work from the 60’s, the Paternal heritage. Christ crucified onto a hammer, if you like, the Redeemer crucified onto the working class, said to be glorious and ruling at the time – full of smile and pain, which Lászó Szlávics Sr. didn’t even renounce for the sake of lying. In front of us there is the Young woman on one huge foot. She is the woman, the anima living in the souls of men since eternity. This woman is as solid and real as the one who has a deep and spiritual relationship with the material we come from. Who is mother and material in one. In the light of glee we can say “she has both feet on the ground,”as the saying goes, since this one huge foot is enough for two. Instead of her head there is an open hand, waiting for blessing and holding onto the sky- this way the earth and the heaven is united in the woman, who creates life from the material of the earth and the blessing of the heaven.

László Szlávics Jr. also tells us stories, like his father. Of course he doesn’t produce literary short stories either, but calls us into inside happenings. Right here the guest objects of the cast bronze items: On the riverbank wing’s fluttering, will it sink? Remember? A fascinating paradox of melancholy.

The artist’s unique venture is the attempt to baptise money. Old coins, even notes used to have the portraits of kings or national heroes on them, this way bearing the marks of personality and even that of cult as well. The modern money is the electron vibrating in the credit card, or not even that, but some impersonal number the global stock exchange gurus are playing with at my expense. To say the least, they keep robbing you and me – absolutely legally, disguised by impersonality. With his cultic proto-money László Szlávics Jr. refers to other cultures and creatures he used, distant in time and space: feathers, cruel skulls of predators, strings, branches, stones – the four elements seem to unite in them, the air, the fire, the water the earth. These medals wish to name Reality again, the real value, which keep us alive. It is no mere chance that circles, triangles and squares are repeated; they are the symbols of perfection, completeness and divinity.

Let’s have a look at the assembled medals. On the one hand, they are technical masterpieces; on the other hand, they are fun and fate, which are the same because they are glee. Worthy companions of Nicholas Schoeffer and István Haraszty’s works. If we get in touch with them, seemingly sleeping time will start in them – their history will appear. Inside us.

On the struck silver medals ostriches are running under the sun, a vulture is fighting a poisonous snake, a splendid couple is dancing flamenco. There is a mirror around them.

Some photos from the works presented: 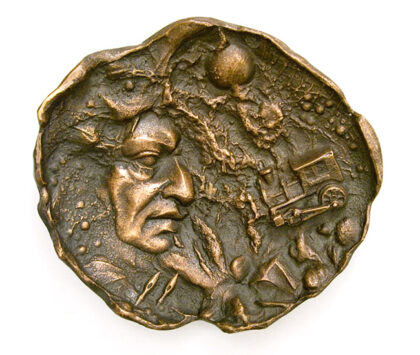 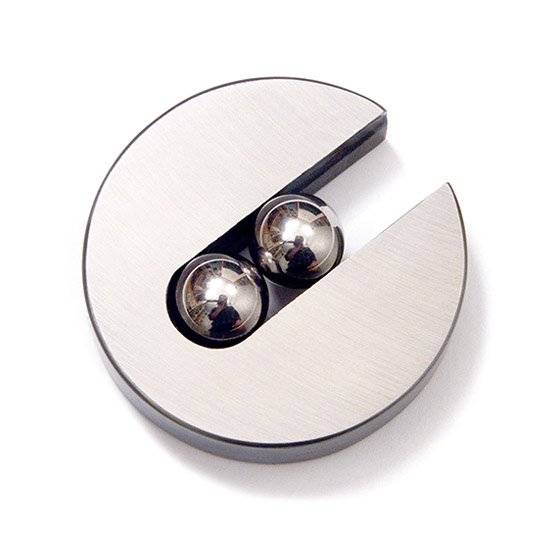 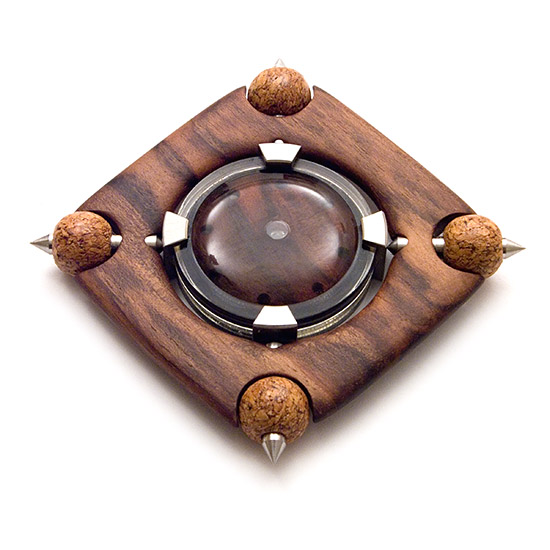 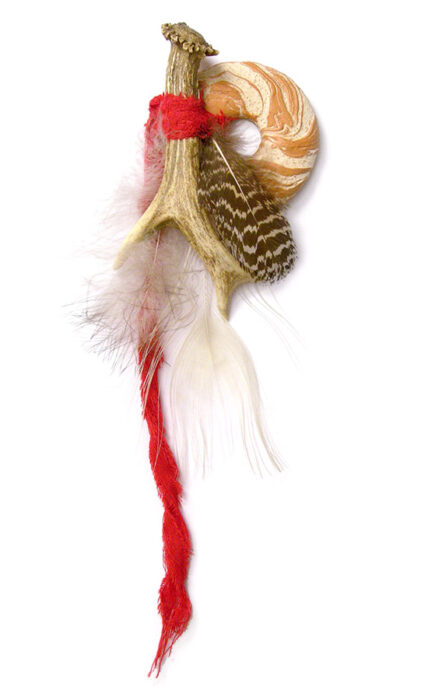