Simultaneously with the National Medal Biennial, as a side event, the previous exhibition features a solo exhibition of the artist awarded the Ferenczy Béni Grand Prix in the small hall of the Sopron Museum.

The carefully selected exhibition material provides an overview of the hundreds of medals made over more than three decades.

In the catalog of the biennial, the study of Antal Tóth gives an overview of the artist’s work. The full text of the article entitled A Wizard in Hungarian Medallic Art, together with reproductions of works of art, is available by clicking on the link.

The study can be downloaded in pdf format under the ‘Writings‘ menu item.

The exhibition can be viewed from June 21 to September 6, 2009. Lábasház, Sopron Museum, Sopron, Orsolya tér 5. Exhibition of László SZLÁVICS jr., winner of the Grand Prize of the 16th National Biennial of Medal Art
A Wizard in Hungarian Medallic Art

It is an obligation for László Szlávics jr. to produce this exhibition, since the organizers of the Sopron Medal Biennial follow the time- tested practice and expect the Grand Prize winner of the previous show to present his/her work in greater depth. (This expectation is at the same time a flattering offer.)

Szlávics jr. wishes to comply by presenting a transparent cross-section of his oeuvre abounding in turns and new solutions in proof of his openness to innovation and restless mental constitution. Not that it means that he rhapsodically tries his hand at this and that. Quite contrarily, he carefully and persistently digs down to the root of any problem that captures his attention and goes on to seek a new challenge when he has exhausted the potentialities of the previous one.

It would not be like him if he did not overbid the offer by putting on display some of his small sculptures as well in the town, in the Körmendi Gallery, in addition to his medals. Not only this complementary exhibition but also the fact that he goes into small sculpture as well is a surprise. Earlier his sole interest was the medal.

László Szlávics jr. began making medals in the traditional manner, but with the intaglio technique. (In the wake o Miklós Borsos and László Csontos it became a popular technique.) In time he replaced their plaster base, which proved too yielding, with steel, reviving a procedure that is only used by the minting institute today.

He has made struck and cast medals alike. The culmination of the previous technique was marked by the ensemble of the Amerindian coins produced with a technical expertise as if they had been issued by the Mint. The perfect technical execution is one of the main idiosyncratic features of Szlávics’s art: he is a

technical genius who wastes his technical skills on useless things. He constructs practically purposeless but aesthetically valuable contraptions of impeccable mechanical and electromechanical subtlety such as the Time- keeper or Four Elements. Beside him the only handy-man sculptor of similar

Let’s return to the starting point. Szlávics improved on the concept of pseudo-money when he created valuables of never existing civilizations (of Stone Age level) from feathers, shells, dried fruits and innumerable other materials to produce his Cultic Proto- Money series. With them he has stretched the

boundaries of medallic art to the extreme, to the anti-medal (as Viktória L. Kovásznai has interpreted them). These objects assembled with the macramé technique can only be linked to medallic art (pseudo-money/coin/medal) in a conceptual way, and each piece is unique and irreproducible. This resistance to

multiplication is perfectly contradictory to this small but prolific art form. It neglects the millennia- tested criterion of the medal.

I think it is the miracle of Hungarian art history and art criticism – even though it can be fairly accurately traced what art political constellations and aesthetic considerations were underlying it – that these objects have been recognized as medals and their creator applauded as a medallist.

The elements, diverse materials used for the cultic protomoney inspired new ideas in the artist who has been creating his works including medals from found (found? adequately selected) objects in the past decade. In this regard, he has treaded in his father’s footsteps; in the old- age period of his

His son, the medallist compiles his medals from a variety of materials such as wood, bone, metal, textile, paper, sand, etc. One group of works insists on the square or round forms reminiscent of the classic medal and plaque in form and size, while another group contains open, irregular compositions with wayward silhouettes, and though they are horizontal objects, they look like small sculpture rather than medal. In the new works a change can be discerned in the artist’s approach and conception: the troublesome work of steel engraving and the mechanical precision have been left behind. Having freed himself of these cumbersome and elaborate methods of execution, the artist has begun to work with “impressive inventiveness”, making work playfully enjoyable first of all for himself. Of course, it needed a great amount of courage!

This turn was also accompanied by a change in themes. From his inventions belonging to pseudo-prehistoric cultures embodied by the Amerindian coins and the Cultic proto- moneys, and from the closed systems measuring real yet abstract time in periodic movement (Time- keeper, Yin- yang, etc.) he switched over to the themes of personally experienced time called history. It is represented by Covenant, Holy Land, My 20th century, Ancient Jewish Cemetery (the latter paying tribute to a fellow artist), etc. and even Family, all being subjective reflections of history.

László Szlávics jr. has set several new norms in Hungarian medallic art. It was presumably not his express aim, but he was merely following the dictates of his innovative mind to do something new not yet found in the trade.

He is heading in this direction, with the sure – and literally tangible – conviction that at the extremes, on the limits of the art form there is still a lot to be searched – and found out.

The works in the exhibition: 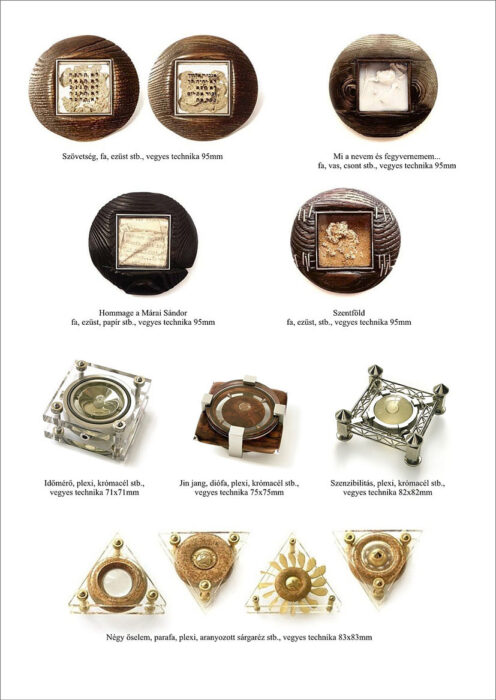 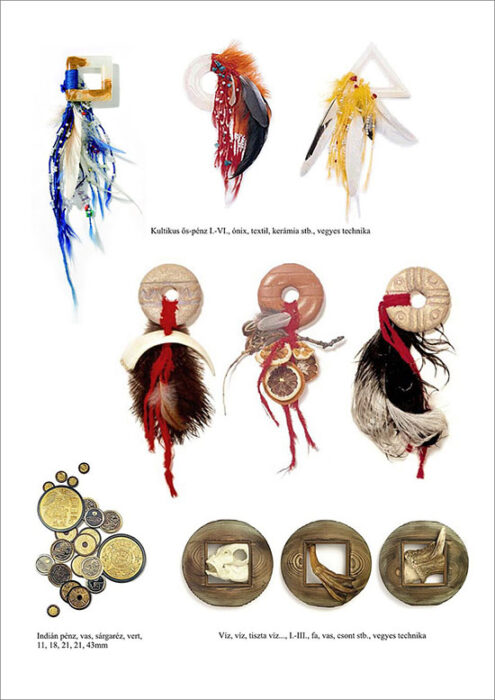 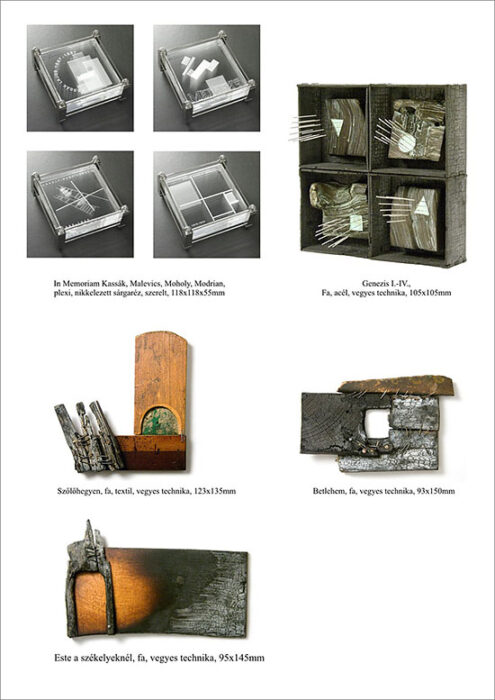